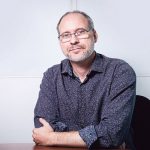 In his current role at Imagineering, Luc Mayrand initiates ideas from the earliest stage, fostering collaboration and building the teams along the way, then works to sell the projects, to then develop them into real experiences, inside and outside the parks.  This approach has been successful for attractions, resorts, and new business development.

– The multi-year expansion of Hong Kong Disneyland featuring a new land the World of Frozen, and the re-invention of the icon of the park:  the Castle of Magical dreams, which was launched November 2020;

– The creation of the Zootopia land at Shanghai Disneyland – under construction;

– The re-invention of Futureworld at Epcot,  starting several of the attractions currently under construction.

– Shanghai Disneyland, the new park, for which he was one of the core creative leads, and creative executive in charge of Treasure Cove, the first land set in the world of Pirates of the Caribbean.

In 20 years with Walt Disney Imagineering, Luc has led or designed iconic attractions in all resorts.

Prior to Disney Luc held roles from lead designer to creative director on projects from Star Trek the Experience in Las Vegas to Terminator2/3D at Universal Studios.  He also serve as concept artist on several films and television series from Predator to Babylon 5.

These project and others provided the opportunity to live and work in Japan, England, France, Korea and China.

Luc’s work and play have been motivated by a lifelong passion for the future, stories, culture, science and design.  Luc is originally from Montréal, Canada. He and his family live in Pasadena, California.