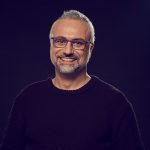 Yves joined Ubisoft in 2004 and oversees the production services studios with the goal of bringing them to the forefront of the video game industry. Yves also developed the studio’s research and development strategy, which led to the creation of a Chair in Artificial Intelligence in 2011. In 2016, he created the first academic application laboratory in the entertainment industry: Ubisoft La Forge.

Since the beginning of his career in electronic engineering applied to the medical field, then in particle physics, Yves has accumulated numerous experiences in the development of technological innovation. He is also a member of the board of directors and scientific advisor of the Centre for Development and Research in Digital Imaging (CDRIN), as well as an enthusiastic science popularizer for Ubisoft.

He was previously a telecommunications project manager in France and a research engineer for CERN (the European Organization for Nuclear Research).