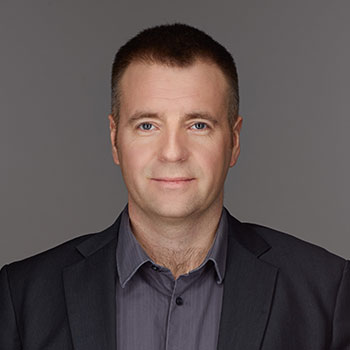 Yannis Mallat joins Ubisoft Montreal in 2000. He quickly makes his mark in the industry as the producer of Prince of Persia: The Sands of Time. Released in 2003, the game is a resounding critical and commercial success, and allows the Montreal studio to establish itself as one of the biggest names in the industry.  In 2006, at the age of 32, Yannis becomes CEO of the Montreal studio and is actively involved in developing a brand that would grow to be one of Ubisoft’s crown jewels: Assassin’s Creed. Under his leadership, Ubisoft Montreal is named Studio of the year at the prestigious Golden Joystick Awards (2014). It has become the largest independent video game development studio in the world, with some 3,200 employees.

Today, Yannis is CEO of Ubisoft’s Canadian studios. This studio collective, comprised of Ubisoft Montreal, Toronto, Quebec and Saguenay, is in charge of developing some of Ubisoft’s biggest brands, including Assassin’s Creed, Rainbow Six, Far Cry, Watch_Dogs and For Honor.

Yannis holds a Master’s degree in International Economic Development and Agronomy, as well as an MBA from HEC Montreal. He was devoted to rural economic development in West Africa for three years prior to his career in the video game industry.