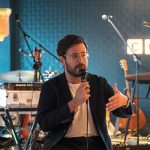 Ramon Marrades is an urban economist, writer, and activist with a passion for people and places. He is currently Director at Placemaking Europe and strategy advisor to several cities and large-scale development projects. Before, he served as the Chief Strategy and Finance Officer at La Marina de València, Valencia’s waterfront redevelopment agency, and as board member of the Worldwide Network of Port Cities (AIVP). Ramon is co-editor of the book “Our City? Countering Exclusion in Public Space” (2019) and the host and co-curator of Placemaking Week Europe 2019. His work focuses on the interface between public space and economic development.

In 2016 Ramon was appointed the chief strategy officer of La Marina de València, València’s waterfront redevelopment agency. Marked by the controversial legacy of a few white elephant projects like the America’s Cup and the F1 Grand Prix, it was considered to be distant, unattractive, and segregated. In 2017 they launched a new strategy, which steered away from the business-as-usual model. Instead of seeking grand-scheme investments, it engages the power of smaller-scale interventions —focusing on uses and programming—to revive the area. So far, in just two years, it has led to an 80% increase in visitors and a 62% increase in revenue.