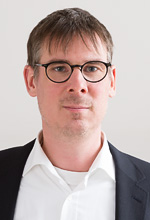 In September 2009 Oliver Ibert took over the position of the head of the research department “Dynamics of Economic Spaces” at the Leibniz Institute for Research on Society and Space and became a professor for Economic Geography at the Freie Universität Berlin.

In 1991 he started to study the topics Geography (major), German Literature and Political Sciences (both minor) at the Carl von Ossietzky University of Oldenburg and obtained his master’s degree in 1997. In 2002 he finished his PhD thesis on “Innovation-oriented Planning” at the University of Oldenburg and in 2009 he finished his post-doctoral habilitation thesis at the University of Bonn. The topic of his habilitation thesis was “Learning dynamics: A relational economic geography of knowledge practices and innovation processes”.

Between 1998 and 2002 Oliver Ibert worked as a research associate in the “Working Group on Urban Studies” at the Institute for Sociology at the Carl von Ossietzky University of Oldenburg. Between 2002 and 2009 he was affiliated with the working area „Socio-Economic of Space” (SECONS) at the University of Bonn, initially as research fellow, later as assistant professor. In summer 2014 Oliver Ibert was a visiting professor at the Department of Political Sciences at the University of Toronto for five weeks. He is a member of the editorial board of Palgrave Communications and acts as a spokesperson of the project group “Experts in Crises” as a part of the Leibniz Research Alliance “Crises in a globalized world”.