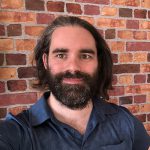 Maxime has followed an eclectic path that went from a career as a musician to the career of advisor in innovation. He has a master’s degree in organisational development, and he works as an advisor in innovation at VIA Rail Canada. Maxime has numerous passions ranging from pirates, Medieval fighting, Idea management and the improvement of group dynamics.

Feeling a need for new alternative to housing in Montreal that would be both affordable and socially richer, Maxime and his wife Marie-Andrée decided in 2019 to start the first cohousing project in Montreal, Cohabitât Espace-Co Montreal. This ambitious project includes more than 20 people who share common values and who work to achieve a shared vision of having nice people living a nice social lifestyle in a nice building at an affordable price.