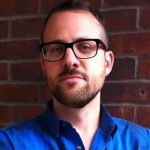 He worked in advertising and the Web before joining the gaming industry. His experience is as a programmer and UX designer. He has been managing creative and technology teams since 2005.