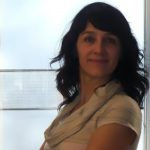 Ms. Hélène Dubé graduated in biology and holds a Masters degree in Environmental Sciences and has more than 20 years of experience. As a project manager, she has been involved in obtaining certifications such as ENVISION, ISO 14001, ISO 9001, LEED, and Green Marine. She actively supported the implementation of environmental management systems and currently supports the Champlain Bridge Deconstruction Project. During her career, she has also managed or collaborated in environmental studies such as environmental impact assessments, biophysical characterizations and waste management plans. She has been the ENVISON Lead for the Samuel De Champlain Bridge Corridor Project that obtained ENVISION’s Platinum award, the first and only Envision project completed in Quebec. She has worked for the sustainability team at the John-F-Kennedy Terminal One Project in New York and for the Montreal-Trudeau airport redevelopment program. She currently works for a project of the City of Montreal to develop an ENVISION strategy. Ms. Dubé has translated the ENVISION manual in French with her team and is also the only one to hold the Envision verifier and trainer credentials in Quebec.