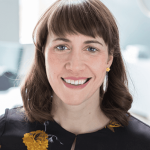 Ms. Chabot began her career in public and private funding in the cultural sector with Wapikoni mobile and as a contract worker, before becoming Director of Development and Special Projects at Exeko, an organization offering cultural and intellectual mediation activities aimed at inclusion and social mixing.

In 2015, she joined the team at the Conseil des arts de Montreal and then became Assistant Director, Philanthropy and Partnerships, where she designed and implemented numerous programs, projects, and events to support the development of philanthropy in the Montreal arts community, in addition to managing all agreements related to the organization’s strategic projects.

A graduate of HEC Montreal and the University of Montreal, Émilie initiated the “Rethinking Cultural Philanthropy in Montreal” project in collaboration with HEC Montreal and the Conseil des arts de Montreal’s Social Impact project with Innoweave, a program of the McConnell Foundation. A fine strategist, she has also worked as a consultant and advisor throughout her career, notably for the Social Innovation House, in addition to sitting on four boards of directors, including that of Architecture without borders Quebec.