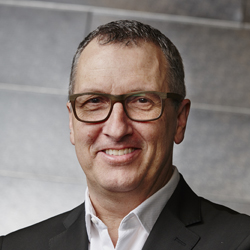 Since August 2008, Charles‐Mathieu Brunelle has been the Director of Montreal Space for Life. Canada’s largest natural science museum complex is made up of the Montreal Botanical Garden, Biodome and Insectarium and the Rio Tinto Alcan Planetarium, all world‐renowned institutions.
Through its communication, conservation, education and research efforts, Montreal Space for Life guides humans to enjoy nature to the fullest. Its institutions, applying a distinctive approach combining science, art and emotion, welcome some 2 million visitors every year.

Montreal Space for Life is undertaking an ambitious business plan aimed at positioning Montreal as a flagship of a vast movement in support of biodiversity. This business plan is also a strategic offensive aimed at preserving and updating the institutions’ prestigious heritage infrastructure and boosting their attendance figures. This started with the opening of the Biodiversity Centre at the Botanical Garden in 2011 and the Rio Tinto Alcan Planetarium in 2013 (LEED Platinum certified) and is continuing with the recently launched Biodome Migration and Insectarium Metamorphosis projects. International architecture competitions were held for the latter three projects, all of which are daring in terms of their aesthetics, their environmentally friendly design, and the visitor experience.
Mr. Brunelle is also associated with several achievements that have marked the cultural life of the metropolis, as TOHU, which he founded and of which he was Executive Vice-President and Founding member for nine years. He also contributed to the growth of the company Marie Chouinard and the Quebec Cinematheque.