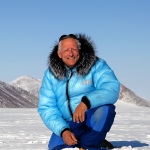 A renowned explorer and mountaineer, Bernard Voyer has over 30 years of expeditions and adventures to his credit. He knows the three poles of the Earth: he reached the North Pole in 1994, the South Pole in 1996 and in 1999 he stood on the roof of the world, Mount Everest (8,850 metres). Among other challenges, in 2001 he completed his World Tour by climbing the highest peak on every continent, making him the first North American explorer to have managed this exploit.

Bernard is a renowned speaker who has given close to 1,000 inspirational presentations in English and French, in Canada, the United States, Europe and Japan, to audiences totalling more than 300,000 to date. He was also a guest speaker for the NASA astronauts, in Houston, Texas, in February 2005.

He has received many tributes for his outstanding career, including the titles of Officer of the Order of Canada, Knight of the Ordre National du Québec and Knight of the Legion of Honour in France, and has received four honorary doctorates and the medal of the Assemblée nationale du Québec and the Meritorious service medal (Military division). In addition, the Royal Canadian Geographical Society awarded him its highest distinction, the prestigious gold medal.

In 2002, he was recognized by the Governor General of Canada as one of the 50 greatest Canadians of the past 50 years. That same year, Canada Post issued a series of stamps celebrating mountains, and paid tribute to him. In 2003, he was decorated by the Prince of Nepal with the medallion given to every climber who had reached the top of Mt Everest. The same year, Bernard Voyer was honoured by his hero, Sir Edmund Hillary, for his Adventure Grand Slam, recognizing his exceptional career as a polar explorer and mountain climber.

Bernard’s commitment to youth and nature remains a priority, as witnessed by his support for various foundations. He is co-Chair of the Order of Montréal, member of the advisory committee for the Canadian Polar Medal and Honorary Consul for Nepal in Montreal. He has previously served as Governor for the Royal Canadian Geographical Society, Vice-Chair of the Canadian Foundation Dialogue des Cultures, board member of the Prince Albert II of Monaco Foundation (Canada), Ambassador for the Offices jeunesse internationaux du Québec (LOJIQ), Honorary Lieutenant-Colonel of the Canadian Rangers (2CRPG) and board member of the Nature Conservancy of Canada-Quebec.