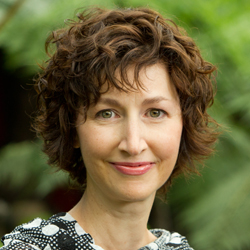 Anne Charpentier holds two master’s degrees from the University of Montreal, one in Biological Sciences (botany) and the other in Museology. Having participated in the design of the Biodome de Montreal, she was responsible for exhibitions and cultural activities. She then renewed all the exhibitions at Environment Canada’s Biosphere, and then managed the libraries and cultural centers in a Montreal borough. Since 2008, she has directed the Montreal Insectarium and led it towards its metamorphosis. The concept of this project was indeed awarded the Canadian Architect Awards, awarded to the consortium of architects, in December 2018.

Her accomplishments and over thirty years of involvement in museology and scientific culture earned her the 2005 “Outstanding Contribution” award from the Canadian Association of Science Centers. In 2013, she became a graduate and honoured personality from the Faculty of Arts and Sciences, University of Montreal.  In 2019, Anne Charpentier was appointed Director of Montreal’s botanical garden at Espace pour la vie.  She has since undertaken the realization of the Master Plan for the Botanical Garden, in order to propel the institution as a player in ecological transition, in view of its hundredth anniversary in 2031.