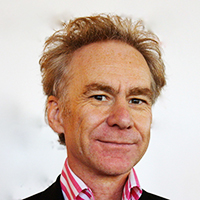 Andy is an internationally acclaimed expert on the topic of the cultural industries. He is a Fellow of the Royal Society of Arts, a Fellow of the Royal Geographical Society, and an Academician of the Academy of Social Sciences. He has held academic appointments at University College London (Bartlett School of Planning) and LSE (Geography, and Urban Research Centre), King’s College, London (Culture, Media and Creative Industries). He joined City University as Professor of Cultural Economy in 2013.

He has published over 190 titles: books, chapters, and articles.

Andy specializes in the analysis of cultural industries in the US, Europe and Japan. This research has two strands. The first focuses on the urban spatial clustering of cultural industries; he is particularly interested in the social and economic dynamics of clustering. The second strand concerns the definition and measurement of employment in the cultural, or creative, industries. He has developed definitions of the cultural sector that are used as standard measures by UNCTAD and UNESCO.

Andy has had major recent research projects funded by UK research councils. He is currently co-principal investigator for a major grant of £4.5m to develop a Creative Economy Hub in London. He currently has a EUR 5m H2020 project CICERONE which explores cultural production chains in Europe

Andy has worked as a consultant or advisor for national and urban policy makers, and the EU, UNESCO, UNCTAD, World Bank and WIPO, and the British Council.