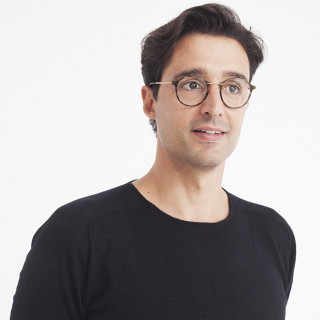 Born in 1979 in Banyoles, as a kid, he clearly had his calling: he wanted to be an inventor and to drop his imagination for creating objects.

In 2002 he graduated in Industrial Design from the Polytechnic University of Girona, to go back four years later as a teacher.

His career has taken him to touch different areas of design, from the most theoretical (lectures and workshops in Chile and Tokyo) to the more technical (product development) as well as the more conceptual or artistic (functional art).

After gaining experience in different companies and design agencies, in 2006 he founded his own studio.

In 2009, he starts a fruitful collaboration with El Celler de Can Roca from which projects as “El gol de’n Messi” the dessert cart “Roca on Wheels” or the hot ice cream machine “oxymoron” have raised, among many others.

Various media have echoed his designs like the prestigious British magazine Wallpaper. In 2011, he was appointed as emerging designer, or recently in Elle Decor he was awarded as the best young designer 2012. That same year he was a finalist for the prestigious Delta award.